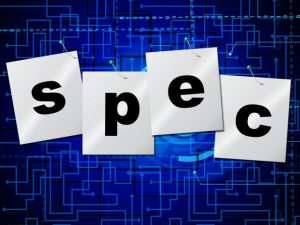 IEEE 802.3u Fast Ethernet in the form of 100Base-T is one of the most widely used forms of Ethernet. It is often considered universal for LAN applications because of its ease of use, and because systems can sense whether 10Base-T or 100Base-T speeds are being used. Additionally, 100Base-T systems can be mixed with existing 10Base-T equipment. 100BaseT Ethernet is defined under the 802.3 family of standards under 802.3u. In a 100BaseT network, all nodes within share the 100Mbps bandwidth. The designation for 100Base-T is derived from standard format for Ethernet connections with the first figure being the designation for the speed in Mbps. The base indicates the baseband the system operates at, and the letters indicate the cable or transfer medium. Cabling versions include the following:

The theoretical maximum data bit rate of the system is 100 Mbps though the actual transfer rate is less than the theoretical maximum in real networks. This is attributed to the additional data in the form of the header and trailer addressing, error-detection bits on packets, and occasional corrupted packets which needs to be re-sent. Additionally, time is lost time waiting after each sent packet for other devices on the network to finish transmitting.

Fast Ethernet can be transmitted over many types of medium, but the most common medium is CAT 5 cable. CAT 5 has four sets of twisted wires. With 10Base-T and 100Base-T, one pair of wires is used for transmission and another for received data. Data is carried differentially over wires where the “+” and “-” wires carry opposite signals as a method to cancel out radiation.