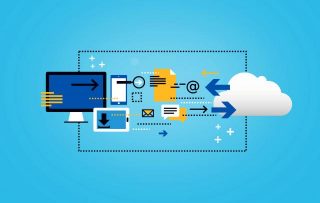 Workload distribution architecture uses IT resources that can be horizontally scaled with the use of one or more identical IT resources. This is accomplished through the use of a load balancer that provides runtime logic which distributes the workload among the available IT assets evenly. This model can be applied to any IT resource and is commonly used with; distributed virtual servers, cloud storage devices, and cloud services. In addition to a load balancer and the previously mentioned resources, the following mechanisms can also be a part of this model:

The following example on how this could be applied in a business environment is based on information provided by Cloud Patterns web. A system contains two (2) virtual instances of a cloud-based domain controller on two (2) different physical servers. To increase performance, domain queries would be received by a load balancer which would then forward the query to the appropriate instance of the domain controller based on the current workload of each instance. In this manner the workload is evenly distributed between both of the servers and domain controller instances.

Resource pooling architecture is based on pooling identical IT resources into groups. Pools can be physical and virtual resources. These identical resources are automatically grouped and maintained by the system which ensures they remain synchronized. Examples of resource pools are as follows:

Resource pools can become very complex so it is best to organize them in a hierarchical structure to form parent, sibling, and nested pools. After pools have been defined, multiple instances of resources from each pool can be used to create an in-memory pool of live IT resources which can be pulled and used on demand by the system as needed. Resource pool architecture uses many of the same type of mechanisms as workload distribution architectures as follows:

Cloud systems require methods to be able to dynamically scale IT resources up or down as demand dictates, and also have mechanisms that provide redundancy and easy management of IT resources. Workload distribution architecture provides a method of distributing workloads across multiple copies of an IT resource, and Resource Pooling provides a method of automatically synchronizing IT resources through the use of resource pools, as well as providing a method for dynamically allocating resources on demand. Taken together, they can be used to design and implement complex architectures that allow for automatic scaling of IT resources as workloads increase and decrease, as well as providing mechanisms for synchronizing IT resources, providing system redundancy, balancing loads between resources, and the management and auditing of IT resources.